This is Jos current bike its an 85 F2 YPVS It has an 86 enigne fitted The Weight has been reduced down to 137 dry kgs He has made it a N model, Cos he likes it like he liks his women Slimline and NAKED !!!

Joe has cut the rear end plastics down a bit right up to the light witch he has painted so it looks like a double light. It was a cheep mod at les then £50 and does make it look a diferent at a low cost. Joe plans on a few more mods a boost bottle and reed spacers to make it a little more revey and responsive and ofcourse to bling it up a bit with the shiny bottle.

There is no Class for an LC or YPVS to race in, in Denmark, so the Dalton's do a lot of road racing on the small backroads around where they live. Sounds a lot like over here with the road racing, nothing like a good thrash on a hot summers day wooping some fat old Diesel in to the weeds. I like your style mate.

This page is dedacated to Joe and the Dalton gang from Denmark.
Joe does a lot of offroading too (besides a lot of RD-bizz) with his RD thrash mate, Killer, who has a XT 250, which he keeps, cause he weighs only 55 kgs, almost too light to start his mono, skinny bleeder he he he
They have just as much fun on the offroaders as with the RD's they ride a lot on the Jutland Westsea beach and in the 2 forests, Rold Forest (biggest in DK) & Dr-lund Bigforest
Joe recons he is quite a racer and says he has never been beaten by anyone in a race a bold statment. Me Thinks ill have to pay him a visit on my F2 he he.
He says he is so aggressive and eager to win that he scares himself sometimes. Despite all that he has only crashed once on the RD's, When a Long John suddenly came across " What ever that is"and a few times during the winter in heavy snow. "So quight a few times realy he he "He would like to have a few more RD's to add to his colection some time.

How many people can tell you how many miles they did on each bike they have owned, this bloke can and has.

Joe is the Founder of a gang of lads who call them selvs the Dalton gang. They live in Denmark and as far as i know are the only RDLC group that have any regular meetings over there.Not every one in the groop have an RD but most do and by the sound of it they are a grate bunch of lads that have a lot of fun when they get together . Joe has is own web site http://www.sitecenter.dk/daltonbanden . I cant reed a word of it but if you can reed Danish give it a look . 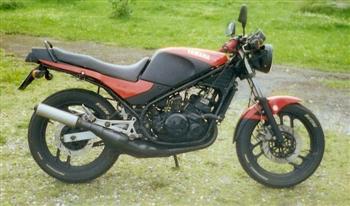 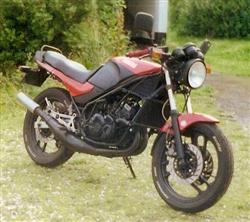 Joe says he is especially found of the lack engine breaking from a 2 stroke , which makes it possible to break hard with the gearbox, without raiscing the rear wheel through corners and rolling in at 8000 rpms in 1st. He almost max throttle in slow corners, that's wherehe says his frends on the 4 cyl 4 strokes are sadly left behind. They also weighs too much Big fat heiry arsed 4 strokes Diesels just make me largh.

Joe is signed on as Joe Dalton in the chatroom and says he is allways up for a chin wag. 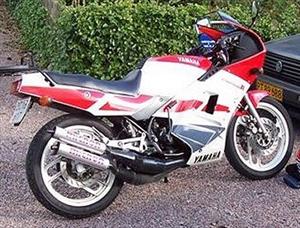 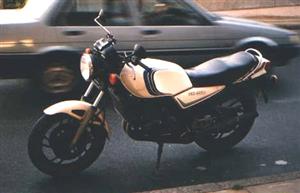 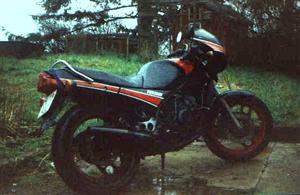 This is Joe's old LC2
This was Joe's one and only LC
This is KILLER'S Brazilion 350R . It is fitted with a set of Micron GP pipes. Joe and Killer have been out quight a few times this year for a thrash, but some how i dont see old Killer keeping up with Joe do you !!?
Not all the gang have an lc or valve in there mc club any one is welcome. That means some spectacular meetings with GXSR 400's GSX-R 400's, RGV's, TZR 250 and so on. Below are some who do have RD's.
The gang is growing but here are the Daltons at the time of this page.
Dalton-name: Joe -age 43
Leader of the pack - prez & founder of the club
Joe never rides alone allways always together with at least one more of his RD pals, usualy hisbest pall Killer from the gang. The record so far is 4 RD's together at one time. Joe would like to double this number, at least in 2006. with a meet some time.

Dalton-name: Gisling, age 40
The one who provides the gang with the hottest links to RD-stuff (he found this site so hes cool in my book) He has spent the most of his biketime on his 2 other bikes, RD 125 LC & Suzuki RG 250 Gamma - but recently got himself a YPVS, which was be stripped down during the winterof 05 for a heavy weight reduction and some engine mods . 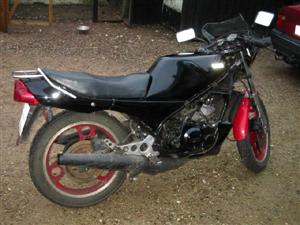 Dalton-name: Burger, age 31, At just over 16st not a light waight rider, but by all acounts a quick one.Since droping 2 down on the front sprocket - now he lifts the front wheel in 3ed. just by opening the throttle
Also got himself an old Sukki DR 500 to dig some dirt with. Not got a pic of this chap but lets face it its the bikes we want to see, he he he . Looks like killers bike behined his. 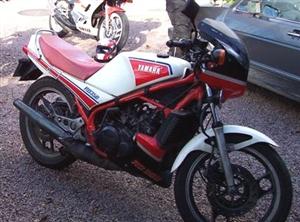 Dalton-name: Killer, age 39
Always rides together with Joe - sometimes on the XT 250's. His 350R can be seen above with Micron GP pipes on. Not a very good pic but its the one i was sent sorry. Even so good anough for my mrs to say she would do him " tart that she is" he he he

Dalton-name: Fighter, age 30,
A true cowboy - loves his RD - and not afraid to fettel his own ports. combined with the roughest (sounding) pipes and his tuned lump the bike go's quite well, one down on the front sprocket gives him a blistering pull of on this bike. Looks like quight a cool bike all in black with that twin eye faring, not sure about the orange wheels No pic of this chap ether. 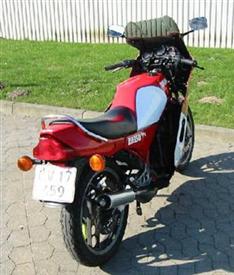 Dalton-name: Fessor, age 54,
No spring chicken, but just go's to show that theys bikes aren't just riden by young hooagans but by the more mature thrasher as well, and respect to him for choosing a valve to ride i say. Lots of race experience on his back raced TA 125´s and passengered Mike Fiddamans TZ 750 & Windle GT 750 . He has chrashed on almost every racetrack in DK and Sweden in his race days. 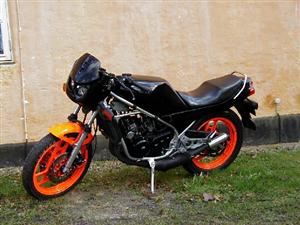 Dalton-name: Fonzie, age 28,
He has fited a fairing from a Suzuki GSX 600, looks like a good fit. Underneath the plastics is a 350R YPVS. I have never seen such a faring mod before and i think it works very well. 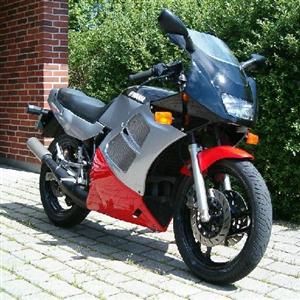 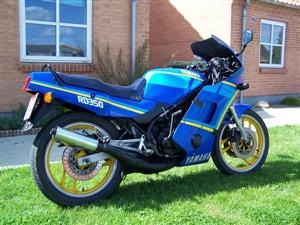 Dalton-name: Simon, age 24,
A newbie to the world of lc's. His Bike's all standard, except for one down on the front sprocket. A nice looking bike very clean.

Dalton-name: Tina, 39
A Dalton Amazona who just loves to ride.
Looks nice all in black, not sure about what that back box is going to do for the slip streem. he he he 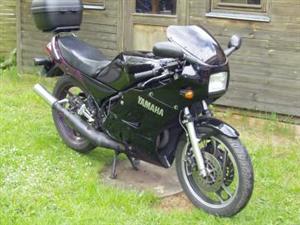 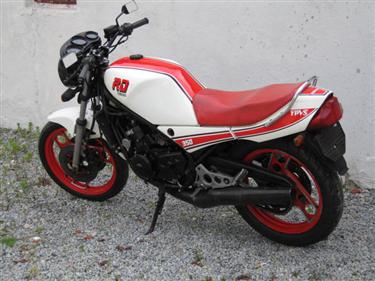 Dalton-name: Jens, age 36 Former carrier on a mully Africa Twin. Now smoking and screaming instead on the old valve. Has did the engine rebuild himself on this bike Its an 83 N1 all standard except from the mirrors.