Track days can be a cheap alternative to racing.

Me and my bike at a show

As you can see I like a good looking bike . If you’re building one up your self , you might as well do the best you can and be proud of what you’ve done .  Much better than slapping together a tatty racer , there’s enough of those already .  The old girls deserve better after 20 years. That and I'm a sad git with nothing better to do.

It’s worth mentioning to any potential LC racers that there is only a 250LC class. The 350's and YPVS can of course race in many class’s but have none just for them . Some clubs have changed the rules stating that 350's run with standard pipes and letting the 250's run aftermarket's . A lot of the 250s out there are resleeved and running two DT175 pistons anyway , making them 370s still carrying the 250 and 4L1 code on the barrels.

I’ve met a lot of top blokes LC racing. Especially Alan Swane who runs with E.M.R.A at Mallory . Infact it was Allan that surjested I try racing. If your thinking of giving it a go, some good advice is Listen to your tuner about the bike’s set up and not blokes at the track.
Some of them will give you duff info so the bike’s not a threat to them . Some of the lc boys take it very seriously to seriously. A bloke I spoke to told me to run a 130 main jet witch would have ofcourse blown it up . Another gave me very bad advice on sprocket size which would have left me miles behind .
This was not what I expected from lc riders . It’s just a laugh to me.

A young lad and his dad I spoke to at darly made a last minute jet change on his very first ever race after taking such advice and blew up some time on his practice lap , a big disappointment for him and his dad expensive to . Most are very nice blokes as you would find out for your self but some are real arceholls

Another pick of me at mallory .  In case you're wondering about the very cool yellow vest . All novice riders have to wear one to let the others know you can’t ride for beans .

Grate fun , but a days racing will cost £130 , Hence me doing just 4 meets . That includes petrol  for the bike and transport getting there and the 3 additional race’s you are entitled to.   My race bike gets around 15mpg max . you have to join the club you race with and join the

This page is about my LC racing . I only did a few races in 2000 just 4 meetings 2 Mallory and 2 Darley . The pick below is me and fluffy at mallory . Him on  his KR1S as he trys unsuccessfully to come round me on Gerrards , infact he crashed it seconds later on the es's still trying to get in front but ran wide , no damage was done . Fluffy and his mate Girlie were two of the nicest blokes I met , both riding KR1S’s in the formula 400 class. Road 400's and 250’s running  together just about any mods are allowed.  .  I was the only LC racing in that class , It turned a few heads with my spindly 20 year old LC along side RS 250's/ RGV and KR1'S and even worse ZXR, FZR400’s and NC45’s . {ever felt like the only white face at a black panthers party , I bloody did} . Still I had a great time and never came last always had a few behind me . I had more fun racing in this class then with the LC'S class . 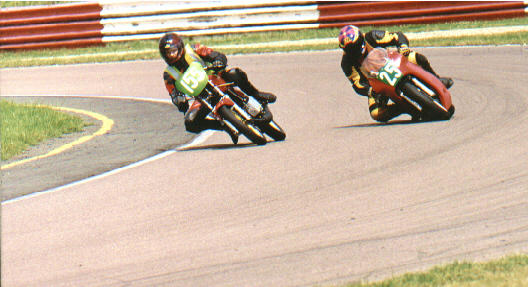 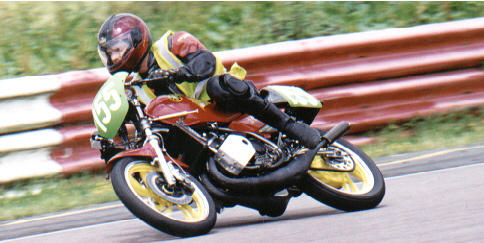 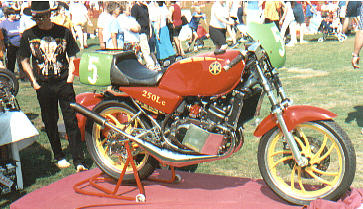