Shaggys has owned this bike since 87 ,when it was his road bike .He converted it in to one the finest LC’s on the road a beautiful  nitrous 7up LC .It stands him at no less than £3000 .Any one wanting to give it a go should bear it in mind . Still it’s cheaper than track racing .A weekend at this costs abought £100 with fuel and food.You get 6 runs a day ,maybe 15 runs on a bank holiday weekend .It uses 2,3 clutches a weekend 5 sets of plates . If any one would like to help nick with any type of sponsor ship you can get in touch with him at ndaniels@quatrix.co.uk

All primed up on the line at Avon park

This bike is owned and built by Nick danials {SHAGGY}

Back wheel 5.5 inch Duke with 7inc slick and Brembo caliper

This the No2 LC at the moment but shortly No1 shaggy  hopes. You can catch him at Avon park Stanford on race days, you could go down and give your support its a good day out and beats reruns on the telly.

Pro stock one off made by Ralph’s Emporium Leicester.

RD80 wheel RD50 forks with one off yoke.The caliper is of a Triumph rear . 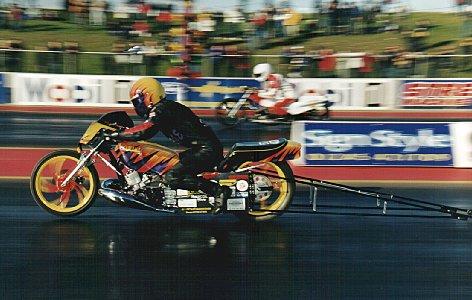